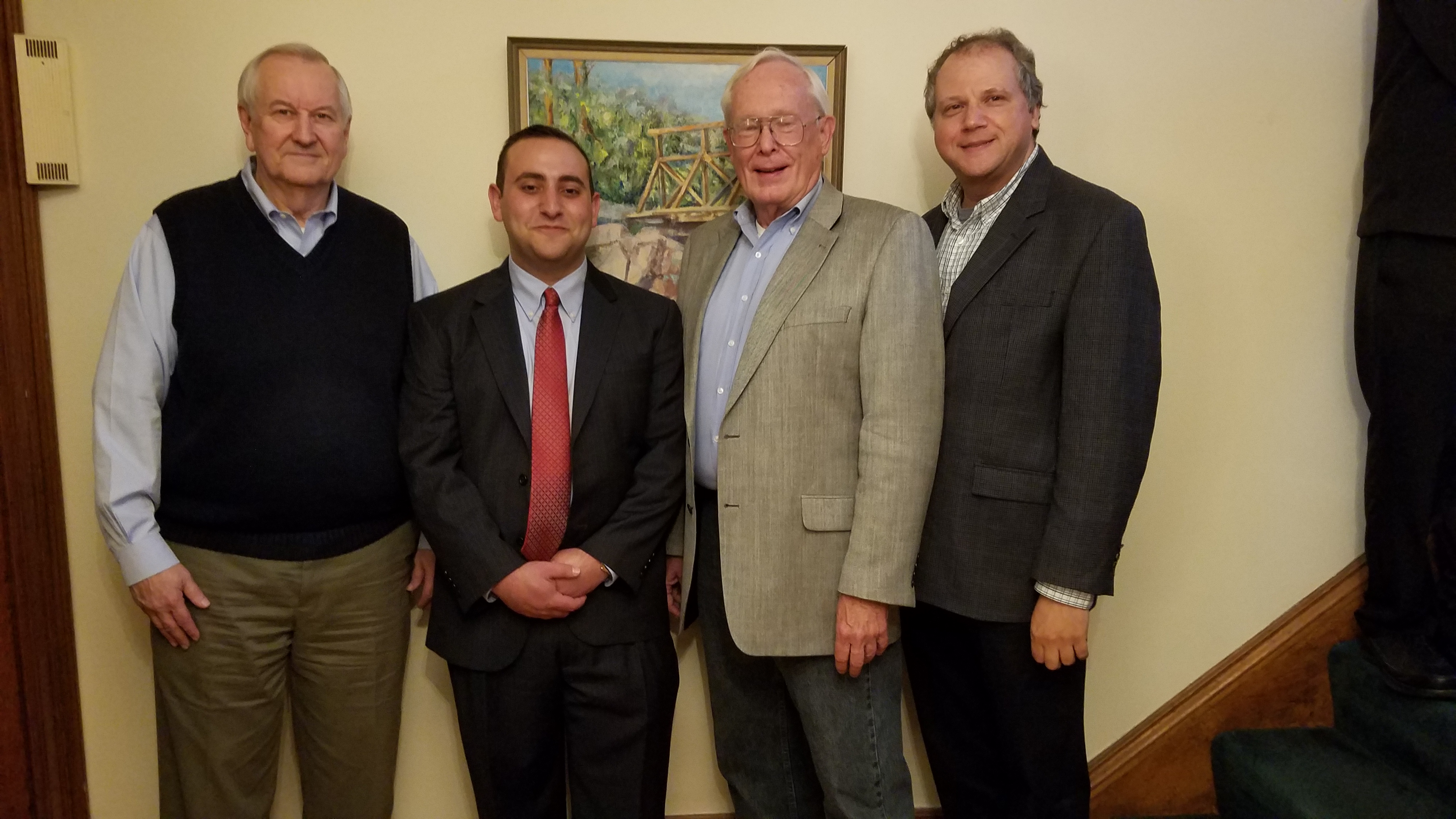 The CIS Department awarded Mike Augello with the 2017 James H. Adair Prize in Computer Information Systems, an award given annually in memory of former CIS Professor James H. Adair, who died in 2002.

Prof. Dennis Anderson and Prof. Doug Robertson presented the award to Mike at a private reception. Family and friends who remembered Prof. Adair  also were in attendance.

Below is an excerpt of Prof. Anderson’s introduction of Mike:

Michael Augello is a junior CIS major from Wantagh, New York.  He is an excellent student, as indicated by his 4.0 GPA in CIS courses and his membership on the Spring, 2016 Dean’s List.

Michael has a long-standing interest in helping others learn and use technology.  He was selected by CIS faculty to work as a tutor in the CIS Sandbox – the CIS technology lab at Bentley – and is widely sought out for his help with learning technology.  Additionally, he built the Bentley Delta Sigma Pi web site from scratch on SquareSpace.  Michael is also an active member of Habitat for Humanity at Bentley – serving as PR Coordinator to build brand awareness through on-campus events and social media presence.

During the past two summers, Michael interned at Altice Media Solutions in Woodbury, NY, where he gained valuable experience with system conversion projects and dealing with the issues of executive-level management change.  This coming summer, Michael will be interning with Protiviti, a world-renowned consulting firm specializing in IT consulting.  He has become interested in ERP systems and will gain valuable experience working on large-scale SAP and Oracle projects.  Michael hopes to work as a consultant at Protiviti after graduating from Bentley.

Clearly, Michael is a young man of many interests and talents.  He is polite, soft-spoken, conscientious, friendly and respectful, traits that also attracted us to our friend and former colleague — Jim Adair.  As Doug mentioned, Jim was an outstanding educator who showed great compassion for others, was always there to help in his quiet and unassuming way, and brought out the best in those around him.  Jim would surely be proud of Michael Augello, this year’s recipient of the Jim Adair Prize in Computer Information Systems.  We are proud of Michael’s accomplishments at this point in his Bentley education, and know he will continue to pursue his education and life’s work in a manner we can all celebrate.

Mark Frydenberg also shared his recollections of Mike’s work in the CIS Sandbox:

Mike is friendly, warm and welcoming; dedicated to his studies, takes his responsibilities seriously, and comes through whenever asked to do something.  Since I first met him, I noticed that Mike has a quiet, predictable presence – always willing to help, he gets excited about what technology can do, and shares his enthusiasm with every event or demonstration at which he participates.  Mike has become one of my go-to people when we need to research a new technology item that we might purchase for the CIS Sandbox.   He won’t just give an answer – but rather, he’ll give an answer and a solution that goes far beyond what I might have expected. Three examples:

“Through tutoring here at the CIS Sandbox, we help students with their assignments and any difficulties they may have with their classes.  As tutors we also learn about ourselves. Through being a tutor I’ve learned to overcome certain difficulties in life as well as learning about the technological advances that life has brought us in recent years.”

These remarks reach far beyond Mike’s experience as a tutor in the CIS Sandbox. They provide insight into Mike’s personality, and teach how all of us can live thoughtfully and responsibly in the world:  Be helpful to others, deal with life’s challenges as they arise as best you can, and enjoy the fullness that life brings.