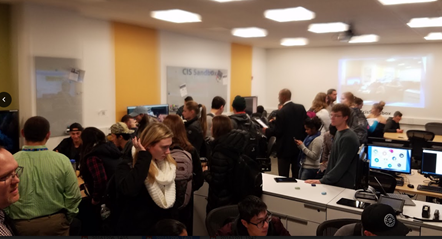 This past Tuesday December 6th 2016, Bentley University’s CIS Sandbox hosted its annual Open House and Tech Fair. There were many fun and exciting demonstrations that were put to use.

On the touchscreen in the front of the room, Mark Xie was demonstrating the newly renovated Sandbox website he had created for us this semester. The website features new functionality and design, which has given the Sandbox a new flavor recently.

On the table, next to the website demonstration, was a demonstration given by myself and a colleague of mine, Olivia Corriveau. This demonstration was exciting and many spectators were fascinated by the capabilities and possibilities that both the Google Home and the Amazon echo can achieve. These devices both use Artificial Intelligence in order to fulfill the role of a personal assistant for the average daily user. While everyone stopped by, including Bentley University’s own president Gloria Cordes Larson, they were enamored at how the device was able to perform the tasks with both fluency and efficiency.

On the next table was a demonstration about something we have been practicing a lot with this semester. Demonstrated by Angela Su and Rob DeSantis, Google Cardboard VR was able to show participants how they can use such simplicity as their phones and a piece of cardboard to experience a virtual reality right on their phones. As well as an in-depth demonstration, we were able to giveaway a few of these google cardboards that were customized with the CIS Sandbox branding to some lucky winners.

On the back table, we had a demonstration of Data Mining from the popular game League of Legends. Santiago Torres, a user of the game and senior at Bentley University, was able to use his tech skills to mine data from the game itself and compile a database of information to use in making him a better player.

On the other back table, we had Jake O’Connell demonstrating Neural Networks that can be used for Handwriting Analysis.

In the center of the room, we had Jon Kleppinger, who demonstrated Beacon Technology. This is a technology that uses a combination of Bluetooth, Proximity, and the Internet of Things to establish Push Notifications to any device that comes near the beacon with Bluetooth Enabled. There are a number of possibilities that this technology can be used for, including everyday marketing efforts by organizations.

On the front table, we had Vivek Dak demonstrating a doorbell made using a Raspberry Pi infrastructure to achieve the documentation of visitors. This is another demonstration of the Internet of Things which has become a major business/technology trend.

Other than these things, we had a demonstration of games that were created by IT-101 students running on the desktop computers in the room. Students in some sections of IT-101 this semester used Construct 2 to create some really cool games as mentioned in an earlier post.

Overall, the Open House was a success, hosting a large colloquium of people and some special guests. In addition to guests from various on-campus departments including Systems and Networks, ATC, Library Faculty, Admissions Staff, Academic Services Faculty, Spiritual Life and the Center for Women in Business, just to name a few. The Sandbox welcomed the Director of the Center for Excellence in Teaching at Simmons College, and IT staff from the Commonwealth of Massachusetts as well.

President Gloria Cordes Larson had commented that, “This year’s CIS Sandbox demonstrations were more polished, more professional, and more engaging than ever before!” Many others had also commented that they could envision a real sense of community amongst members of the Sandbox through our eagerness, ability to build and customize technological solutions and our willingness and excitement to share our experiences with others.

This was a really fun and engaging event for our community to experience and we hope to see you at next year’s open house and tech fair! Thank you for all of your support!