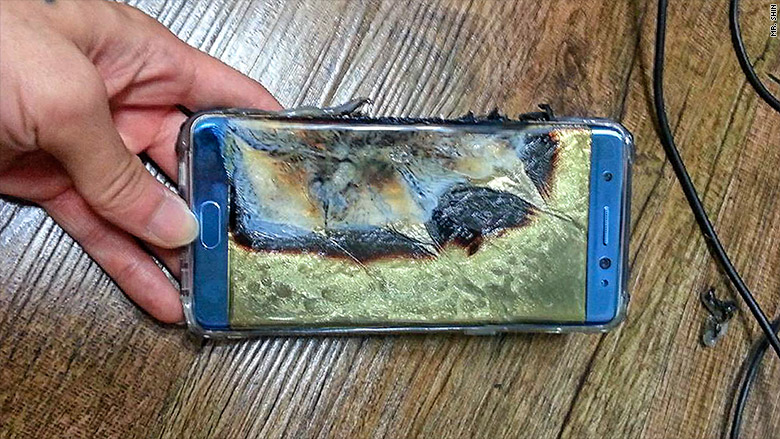 Samsung recently released the Galaxy Note 7, bragging about the new stylus, security and protection features, and increased storage.  The phone has an iris scanner to unlock, in order to protect user’s data more effectively.  It is also water-resistant, and can survive thirty minutes under five feet of water.  The device is quite impressive.  However, Samsung failed to predict that the battery would overheat to the point of explosion.  Due to the use of low quality batteries, excessive use and charging of the phone may cause fires or explosions.  The problem stems from a production error that placed pressure on the batteries, causing opposite poles to get too close and overheat while charging.  Because of this, the US Consumer Product Safety Commission (CPSC) recalled one million Note 7s, advising to power the device off as soon as possible and return it.  Samsung received over 90 reports of fires, some of which caused injury or property damage.  Airlines have banned the phone on flights, whether in the cabin or in checked luggage.  Some public transportation systems have done the same thing.  Although the recall only affects 0.1% of Galaxy Note 7 users, it can be a huge hazard when brought into a public location.

Luckily for Galaxy Note 7 users, replacement phones are available.  It may take a few weeks because the new phones need to be approved by the CPSC.  Until then, Samsung will provide users with a loaner phone in the form of the Galaxy J-series.  Once the new phones are in, users have the option of getting a brand new Note 7, or settling for the S7 or S7 Edge, with a refund for the difference in price.  In addition to the replacement, Samsung is giving the affected customers a $25 gift card or phone bill credit.  Each mobile carrier has its own plan as well.  All the large carriers are allowing returns and giving refunds or exchanges when the new phones arrive.  The only exception is Verizon, which has stopped selling the Note 7 and has only pledged to waive the restocking fee if users return their phones (Verizon being cheap? Not surprising).  Safe to say, I’m glad I didn’t buy a Note 7.  Apple: 1.  Android: 0.

Get Smarter with the Smart Board!